0 item(s) - 0.00€
Your shopping cart is empty!
Welcome visitor you can login or create an account.
HomeWish List (0)My AccountShopping CartCheckout 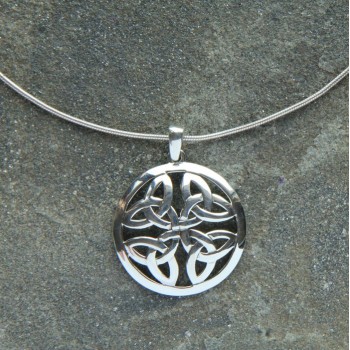 Qty:
- OR -
Add to Wish List
Add to Compare
Description

This is a spectacular large Sterling Silver Celtic Pendant. The pendant is concave so sits well on the skin and exhibits its design from a side angle also.

It has four triquetra's which come together at the heart of the piece symbolising the Four traditional Provinces of Ireland, Munster, Leinster, Connacht and Ulster. It is also known as the four sisters.

The Triquetra itself is associated with the Celtic Mother Goddess whose domain was the earth, the sea and the sky. It also is known to represent body, mind and spirit.

The Pendant comes complete with a 18" Silver Chain.

We take every precaution to ensure that our products reach you in optimal condition. All orders are processed through paypal, so you can have peace of mind knowing your information is safe and secure. Please feel free to send us any comments or suggestions and enjoy your visit to our site.